It was an overdue. Apple changed the design of the MacBook Pro in 2016 and made it the better MacBook Air alternative. However, changes such as the butterfly keyboard, the touch bar and the new USB-C ports and the elimination of MagSafe met with harsh criticism. It is therefore all the more gratifying that Apple has accepted this and wants to do a lot better with the new hardware generation – starting with the processor.

The M1 chip has been properly drilled out for the new MacBook Pro models. You’ll have to make a choice though, as Apple has unveiled two new chips at the same time. The new M1 Pro is the first. With this, Apple increases the performance significantly. The 10-core CPU consists of two cores for efficiency, while the other eight cores ensure peak performance. Although Apple did not give any exact performance data, it did state that the chip clearly outperforms other mobile processors. Apple’s M1 Pro is said to be up to 70 percent faster than the regular M1, while you can now equip your Mac with up to 32 GB of memory again. In addition, the Pro chip is equipped with a 16-core GPU, which is said to have clear advantages over other processors due to the deep integration. The graphics unit is supported by the new display engine, which makes it possible to connect multiple displays at the same time.

In addition to the M1 Pro, Apple introduced the M1 Max and again increases the memory bandwidth from 200 GB/s to 400 GB/s, while you can equip it with up to 64 GB of RAM. The graphics unit has further increased Apple’s, adding another 16 cores to the M1 Max, giving you a 32-core GPU to do all the work.

Incidentally, the combination of MagSafe 3 and the new M1 processors not only promises long battery life of up to 21 hours (16″ MacBook Pro), but also a quick charge function that charges the MacBook Pro up to 50 percent within 30 minutes. 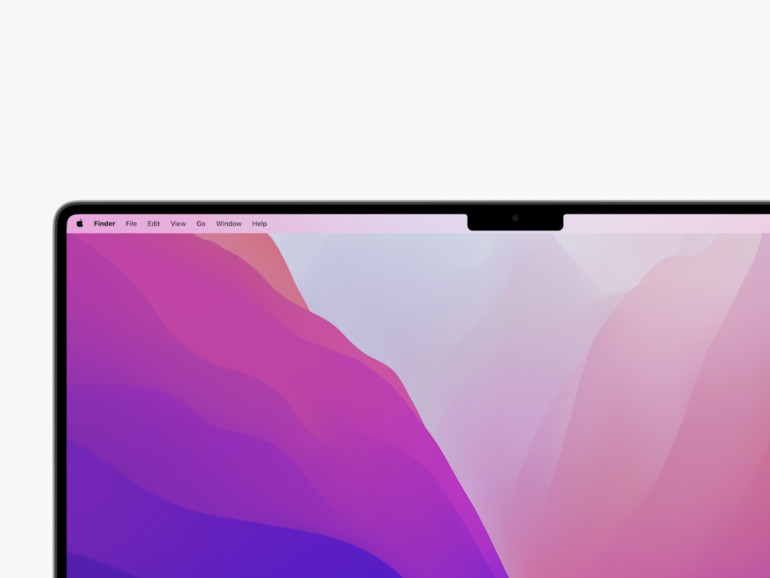 The “MacBook Pro” lettering has disappeared from the front. Instead, there is now a view of an almost borderless design. According to Apple, the bezel is only 3.5 mm narrow, so you can see a cutout for the camera on the Mac, but it fits perfectly into the menu bar. In general, the MacBook Pro has become a bit rounder and is more reminiscent of the earlier generations. After the processors, the big highlight is of course the display with mini-LED display, which Apple calls “Liquid Retina XDR Display” and offers an extremely high contrast of 1,000,000:1. The average brightness here can be as high as 1,000 nits, while a maximum of 1,600 nits is possible. Previously, the maximum brightness was 500 nits.

In addition, Apple is bringing the ProMotion technology from the iPhone 13 Pro and the iPad Pro to a Mac for the first time. This not only makes the devices more efficient, but they can also achieve frame rates of up to 120 Hz and thus display content as smooth as butter. You will notice this when scrolling in Safari or when editing video.

Apple also announces that the display sizes have increased. If you look at it correctly, the 16-inch model no longer offers 16 inches, but 16.2 inches, while the 13.3-inch variant has grown to 14.2 inches without significantly changing the dimensions. However, the new 14″ MacBook Pro has gained around 200 grams in weight and weighs 1.6 kg. Depending on the processor, the 16.2″ model weighs between 100 grams (M1 Pro) and 200 grams (M1 Max).

Apple has learned from the mistakes of the past generation and is bringing back many ports that were lost in 2016. The first is MagSafe, which has now reached the third level and safely charges your Mac. In addition, this is not a fixed charging cable-power supply combination, but the cable can be removed and is the first USB-C to MagSafe 3 cable. This gives you flexibility and you don’t necessarily have to carry the large power supply with you , but you can plug into any USB-C interface. Alternatively, you can continue to charge via the USB-C port.

Speaking of USB-C ports. Apple included three ports with Thunderbolt 4 specifications on both models, so you’re ready for the future. Apple is also bringing back the SD card reader and allowing you to connect monitors and televisions via the HDMI port, which also fell victim to the 2016 scissors. Interestingly, the 3.5 mm jack for headphones is also retained.

When it comes to connectivity, don’t expect miracles. Once again Bluetooth 5.0 is available to you, while the new MacBook Pro also supports WLAN 6 or 802.11ax for the first time and thus offers higher transfer rates and improved stability.

FaceTime Camera: Better in the picture

Apple has updated the camera systems of some devices this year. Among them was the new 24″ iMac. The improved FaceTime HD camera is now also used in the MacBook Pro and, in addition to a higher resolution of 1080p, promises better performance in poor light. The Apple chip’s image signal processor further supports the camera quality and thus allows functions such as portrait mode. Apple also revised the microphones, which previously delivered “studio quality”. Now the company has upped the ante and, together with macOS Monterey, is bringing 3D Audio and various microphone modes that filter out background noise and make you sound loud and clear.

The new MacBook Pro models shouldn’t sound bad either. Apple revised the sound hardware. The company promises a Hi-Fi 6-speaker system with force-balanced woofers that will enable wider stereo sound. In addition, 3D audio should be supported for music and Dolby Atmos for videos.

The MacBook Pro is available in several basic configurations. The previous entry-level model with a 13.3-inch display and M1 chip starts at 1,449 euros. The new 14-inch version with a mini-LED display and M1 Pro, on the other hand, is available from 2,249 euros, while the 16-inch version of the MacBook Pro only starts at 2,749 euros and can cost just under 7,500 euros at the top. Apple will be accepting pre-orders from this evening and the devices will be delivered from next week (October 26).