The new MacBook Pro with M2 processor has recently become available. The first tests have already been made – the US media in particular have published extensive reviews of the revised laptop. We looked at a few and summarized the tests.


Apple presented the M2 MacBook Pro at the beginning of June and surprised with an almost unchanged design. This point is also mentioned in almost all reviews – otherwise the testers limit themselves to trying to clarify the performance of the new Apple M2 chips.

However, those who expect profound insights will be disappointed. The first look in these tests of the new MacBook Pros focuses on the M2 processor and is therefore often somewhat one-dimensional. 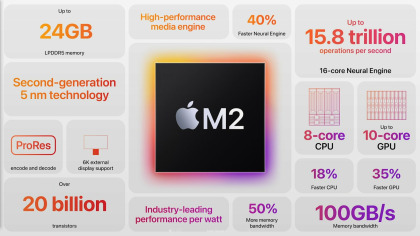 The opinions of the media

The Verge did some comparisons between the M2 MacBook Pro and its M1 predecessor, as well as the M1 Pro chip in the 14-inch and 16-inch MacBook Pro: “In the single-core benchmarks that I ran, the M2 surpassing the more expensive M1 Pro, which is impressive in itself (it suggests that while the M1 Pro has more processing cores than the M2, those cores are not as strong as the processing cores of the M2 on an individual level).

But it also bodes well for the M2 Pro, Max and Ultra variants that we’ll likely see in the future; they will likely feature improvements in single-core speeds compared to their M1-based predecessors, rather than simply adding more cores,” the report reads.

Otherwise, the battery life is particularly positive. On the other hand, there were devaluations in addition to the 2016 design, the webcam and the fact that the computer only has two USB-C ports.

At the Online magazine iMore the main question is how “new” the new MacBook Pro actually is. Hangers are the relatively few makeovers. According to iMore, these are particularly convincing. The M2 masters all the tasks set in the test and is a “successful update”. iMore closes its report with an overview of the pros and cons that speak for and against a purchase.

CNET notes that while the M2 MacBook Pro is the first M2 Mac, the true comparison will not come until the release of the M2 MacBook Air next month. This will give a closer look at the efficiency and performance of the M2 chip.

Tom’s Guide while concluding that the new MacBook Pro offers great performance and amazing battery life, wonders if that’s enough. However, this review does not reveal many negative things either. On the other hand, there are words of praise for the keyboard, which was otherwise hardly mentioned in the tests.

gizmodo has some more full details on the M2’s performance in benchmarking tests and how it compares to other devices on the market: “Our tests backed up these claims, with the M2 chip helping the MacBook Pro 13 achieve a Geekbench 5 score of 8603, which is about 15.2 percent higher than the previous model (7,470 points).Although the MacBook Pro 13 can’t compare to the MacBook Pro 14 (12,663) with M1 Max or to the more powerful Intel chips in gaming laptops like the Asus Zephyrus G14 (9,830 ) the MacBook Pro outperforms its competitors like the Microsoft Surface Laptop 4 (6,643) and the Lenovo Yoga 9i (7,259) with the latest Intel Core i7-1260P.”