As usual, Apple presented its new smartphones in autumn. In addition to the iPhone 14, a larger version of it (iPhone 14 Plus), there are also new models in the Pro range, which are among the best smartphones on the market with Android devices from Google and Samsung. We tested the most important model, the iPhone 14 Pro, for 2 weeks and reveal who is worth buying or switching – and who is better served with other devices.

One thing is certain: The iPhone 14 Pro is a super processed smartphone with impressive features. However: Who really needs the best or brightest display, the fastest chip and ever larger (and heavier) camera lenses? The fact is, the computing power of top smartphones such as the iPhone 14 Pro cannot even be used to the fullest of the most complex mobile phone games. However, since smartphone cameras in connection with the software working in the background can replace system and digital cameras more and more effectively, the manufacturers’ top models are becoming more and more interesting for amateur and professional photographers and videographers. The iPhone 14 Pro, with its new features and hardware updates, will therefore be able to inspire photo fans and video artists in particular.

by the way: To protect your iPhone, you should use the right case. Here you can Leather caseor a Silicone case Select. 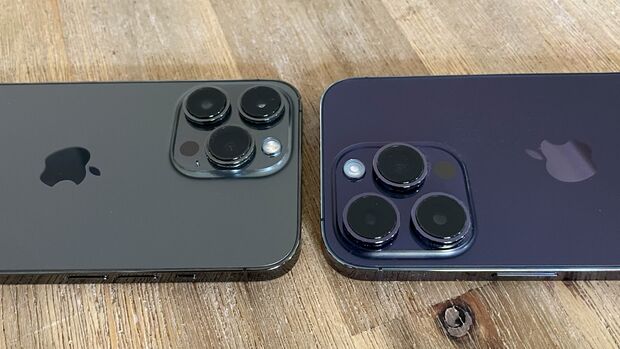 IPhone 13 Pro (left) and 14 Pro in comparison: The iPhone 14 Pro is a bit heavier, and the 3 lenses have also become larger

What’s new in the iPhone 14 Pro? What are the differences to the predecessor?

This is probably the most notable change Always-on display. In standby mode, the phone’s lock screen now shows information such as the time, notifications and other customizable widgets, just dimmed. A feature that Android phones have had for a long time. The difference: The iPhone shows everything that ends up on the lock screen – including the background image. If that annoys you, you can also disable the feature.

Second innovation: the so-called “Dynamic Island“, with which Apple turns an annoying design compromise into a feature. Since the iPhone X, there has been a dark recess at the top of the display for the front camera. Now it becomes a pill-shaped, black “island” in which notifications and information are displayed around the front camera Active apps can be displayed, such as a music player, a running timer, Face ID or even phone calls. The island has thus become a new control surface that adapts in size and also allows quick access to apps. Currently this only works with Apple Applications, 3rd parties may use this in the future though, similar to the notch above before, the island still gets in the way when watching full screen video, but it’s less of a nuisance and is actually a handy feature that I enjoy using. 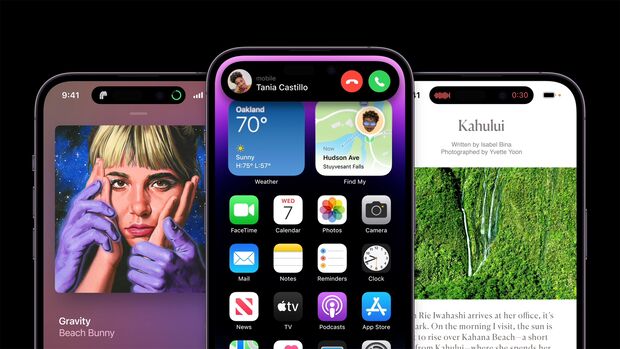 With the Dynamic Island, Apple has turned a disruptive design compromise into a feature

The iPhone 14 Pro is slightly heavier (now 206 g) than its predecessor (203 g) – for comparison: the 12 Pro still weighed almost 190 g. It is protected from water and dust (IP68 certified) and supports cashless payments via NFC chip. You can unlock the smartphone with a code or biometric facial recognition (FaceID). There are magnets on the back so that the right Qi charger automatically finds the best position. The battery performance is on the same level as the iPhone 13 Pro, one charge should last for 20 hours of video streaming or up to 75 hours of audio playback. 30 minutes of charging bring 50 percent power. Probably the most interesting innovations are in the cameras:

How good are the cameras in the iPhone 14 Pro?

The iPhone 14 Pro comes with 4 lenses as usual: a front camera and a triple camera on the back:

the main wide angle lens The iPhone 14 Pro gets a 48-megapixel sensor for the first time – nothing new for Android phones. Some 108 MP are already integrated there. However, many pixels do not automatically bring better images, the sensor must also be able to process the large amount of data. Therefore, the quality of the 12 MP lenses from Apple is usually significantly better than that of many competing camera systems with more megapixels. The fact is: the new main camera of the iPhone 14 Pro snaps photos with more details than the 13 Pro. This is clearly noticeable when shooting in difficult lighting conditions and, of course, when you zoom in.

By default, the photos are still only 12 MP. Because Apple uses so-called “pixel binning” to combine several pixels in order to produce better images at low resolutions. Tip: You get the full potential of the 48 MP sensor when you shoot in ProRAW format (can be switched on in the top right of the photo display). The format is perfect for post-processing on the computer – your pictures will be much sharper and more detailed. But: RAW images need a lot of storage space. 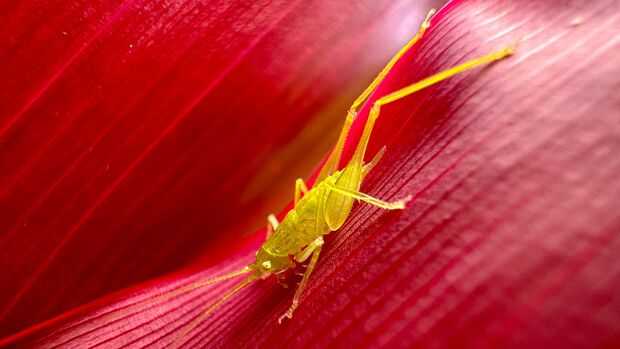 macro photos. The function switches on automatically as soon as you bring the iPhone within a few centimeters of the object

the ultra wide angle camera also got a bigger sensor. The most important feature of the lens: macro photos. The function switches on automatically as soon as I bring the iPhone within a few centimeters of the object. Practical: So I need for the macro photography no more extra lenses or attachments. The macro photos cannot be compared with professional photos, but they almost always look good.

That tele still has a 3x zoom and now has optical image stabilization that helps against shake. Another new feature in photography is a 2x zoom, which is generated digitally via the main camera but delivers very good images.

In the test, the new 48 MP main camera in particular took significantly more detailed and brighter pictures than the previous model at night and in low light. The iPhone 14 Pro pulls quite a bit out of the darkness here.

Of course there are smartphones that come with better cameras (more focal length or optical zoom and light intensity). The big advantage of the iPhone 14 Pro also lies in the software or artificial intelligence (AI) that processes the images in the background.

What photo features are there and how well do they work?

The new cameras of the iPhone 14 Pro take pictures with higher resolution and more detail, especially in low light conditions. This is partly due to the larger sensor, but also to the AI ​​working in the background. An HDR function automatically improves the exposure of the photos, especially very dark and bright areas. The feature called “Deep Fusion” by Apple optimizes exposure, image noise and increases the details in the image – also automatically. What is new is the so-called “photogenic engine“, another AI-supported processing of your pictures, which should still ensure better shots, especially in bad light. Apple doesn’t reveal exactly how this works. But the fact is that it works. Photos in the dark are impressive with the iPhone 14 Pro .

How good is the iPhone at video recording? What video features are there?

Cinema mode has been around since the 13 Pro. This effect, known from films, focuses faces or objects and blurs the rest. And the focus can be changed, either manually by tapping or by artificial intelligence, for example if a person turns their head to another person, it will automatically focus on them. Great: I can not only change the focus while filming, but also later via the Photos or iMovie app. Cinema mode is now also available in 4K. But: For this you need an iPhone with at least 256 GB of storage space. 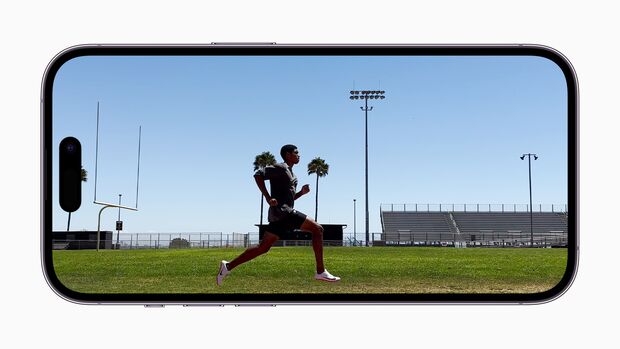 With the new “Action mode” in the camera app, video recordings are much better stabilized

Cons: Apple doesn’t have 8k, and I can’t change the video aspect ratio from 16:9. But: With the new “action mode” In the camera app, shaky video recordings are stabilized much better. In the test, this worked surprisingly well and can even keep up with gimbals (motorized mounts against vibration) and action cams.

What other features are there for photographers?

Since the iPhone 13 Pro there’s “Photographic Styles“, from which I can choose when taking photos. These profiles are presets that I can choose before I snap a photo. They differ in terms of contrast and color temperature, for example to avoid yellow casts in dark shots with artificial light. Advantage: the time-consuming post-processing omitted.

The iPhone Pro can take pictures in RAW format record (Apple calls this ProRaw). With this format (DNG instead of JPG) you can change the raw data of an image (color profile, depth levels), edit it individually, before it is automatically processed and compressed by Apple’s photo software.

Conclusion: Who is the iPhone 14 Pro suitable for?

The iPhone 14 Pro is one of the top smartphones on the market, with a few Android alternatives such as the Samsung Galaxy S22 Ultra and the Google Pixel 7 Pro. The new features (Always-On-Display and Dynamic Island) are fun. The processor is ultra-fast, everything runs smoothly and quickly. Normal users will probably hardly notice this and are completely satisfied with older iPhone models.

Anyone who likes to take photos a lot, especially in difficult lighting conditions, will appreciate the fast lenses, the AI-based revisions, the very good post-processing options and also the macro mode. Video recording with the new action mode is really impressive. The post-processing of films also runs on the smartphone in fractions of a second. This means that the purchase is only worthwhile for those who like to take photos and make films with the iPhone a lot. Older models are sufficient for pictures and videos in normal lighting conditions that are shared on social media.